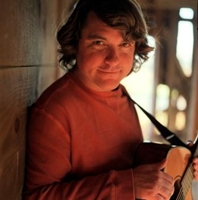 Since he first appeared on the scene in the early ’90s, Keller Williams has defined the independent artist. Most of his career has been spent performing as a one-man band—his stage shows are built around Keller singing his compositions and choice covers while accompanying himself with an acoustic guitar connected to a Gibson Echoplex delay system that allows him to simulate a full band.

Williams’ solo live shows—and his ability to improvise to his determinedly quirky tunes despite the absence of an actual band—quickly became the stuff of legend, and his audience grew exponentially once word spread about this exciting, unpredictable performer. Keller’s albums, meanwhile, were embraced by a wide community of music fans. Among his albums—Thief is his 15th—Williams singles out 2003’s Dance, consisting of remixes from the earlier Laugh record, as a personal favorite.

For the brand new recording Pick, singer/songwriter/multi-instrumentalist Keller Williams teams up with Nashville’s beloved bluegrass family The Travelin’ McCourys. And as revered and successful each are in their own right, the collaboration delivers much more than either act alone. The album’s 12 songs – a mix of originals and covers – put a unique twist on Americana music’s long storytelling tradition, and the impeccable musicianship displayed on Pick captures all the heart and heartache of the bluegrass genre.

Keller Williams with the Travelin’ McCourys: It’s a perfect, albeit unexpected fit.

With his sixteenth album, Kids, Keller stakes out his next conquest – the absolute adoration of the under-10 crowd and their parents, caregivers, and relatives. With Kids, Keller creates a style of family music that’s all his own, and reaches his young audience in a way that matters. While other performers play for kids, Keller plays with them.

Keller and the husband and wife duo of Larry and Jenny Keel created this a masterful follow-up to their popular 2006 album Grass.  Thief is comprised entirely of unique bluegrass renditions of songs originally written and recorded by a diverse group of musicians, from Amy Winehouse to the Grateful Dead, the Butthole Surfers to Kris Kristofferson.

On Live (September 2008), Keller taps into the world-class talent of Keith Moseley (bass The String Cheese Incident), Gibb Droll (guitar Marc Broussard, Brandi Carlile), and Jeff Sipe (drums Aquarium Rescue Unit, Leftover Salmon). Recorded at select live shows during a winter 2007-2008 tour, and featuring seventeen tracks that span Keller’s career, Live is a testament to how a band, with the right chemistry and chops, can take a song to places even the writer couldn’t have imagined.

For his eleventh album, dream, the one-man-band brings in a dream team of guest musicians to back him up!  Bela Fleck, Bob Weir, Charlie Hunter, John Scofield, Martin Sexton, Michael Franti, Steve Kimock, The String Cheese Incident and Victor Wooten are all featured on the album.

Keller’s twelfth album release looks back at a ground-breaking and already remarkable career.  Aptly titled 12, the album features one standout song from each of his previous eleven releases.

Keller releases his first-ever DVD – finally, a visual souvenir of Keller’s awe-inspiring live shows! Recorded at Mr. Small’s state-of-the-art theatre facility in Pittsburgh, PA in November 2004, Sight features over 100 minutes of concert footage, plus plenty of hilarious b-roll footage recorded over his many years on the road.

Our one-man-band, Keller Williams, is releasing an album that highlights his awe-inspiring live performances. Stage brings YOU front row to experience Keller’s technical virtuosity and wicked sense of humor. This two CD set is a live compilation of Keller’s 2003 tour.

“a pseudo house mix of the album Laugh.” An infinite amount of fun was had by my taking of the existing tracks from Laugh and creating new, techno sounding, dance songs…”

Home finds Keller in his natural element and perhaps better represents what dwells at the source of Williams’ prolific artistry than any of his previous studio recordings.

With his sixth CD release, Keller perfectly exhibits his playful spirit without diminishing his musical genius and technical expertise. Offering fifteen dynamic songs, Laugh is a truly inspired album by one of today’s most gifted and understated musicians.

Keller’s first live release, Loop was taken from three separate shows in the Pacific Northwest during March of 2000, and captures Keller at the peak of his loop exploration phase!

Recorded in a small studio in Virginia Beach, VA, Spun, offers the stripped down acoustic side of Keller. The recording quality on this one is crystal clear, showcasing Keller’s voice and allowing the listener to easily hear the intricate guitar work.

This very diverse disk contains everything from solo guitar pieces to full-band productions. Buzz covers many genres of music such as world beat, reggae, bluegrass and rock. Featuring guests such as Gibb Droll, Doug Derryberry, Andy Waldeck and Larry Keel.

Keller’s first CD, this album is composed mostly of solo arrangements of his early tunes and a few tracks featuring backing musicians. Freek is overall a very raw and young sounding Keller.