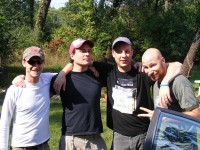 When Jake Cinninger took the stage as a member of Umphrey’s McGee for the first time in September 2000, then recently disbanded Ali Baba’s Tahini appeared to be a thing of the past.

And though the members decided to go their separate ways professionally, the long time friends and musical cohorts never lost touch and never stopped creating music.

On July 13, 2010 Ali Baba’s Tahini release their fourth album, Living Room. Follow-up to the spontaneous Rockstars and Lawnmowers (2005), Living Room is a carefully crafted product of Cinninger’s and Karl Engelmann’s collaborative songwriting.   Get comfy, Living Room has room for everyone.