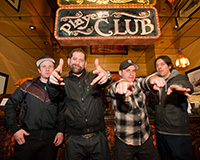 Formed in 2004 with New York DJ/producer DJ Omen, Conspirator has taken on many forms through the years. With the recent addition of virtuoso guitarist Chris Michetti and a rotating cast of some of the country’s best drummers – Darren Shearer (the New Deal), Mike Greenfield (Lotus), KJ Sawka (Pendulum) and Adam Deitch (Break Science, Pretty Lights) – Conspirator has reached another level.

2011 was a seminal year for the group with groundbreaking performances at the Ultra Music Festival, Nocturnal Festival, Electric Forest Festival and Camp Bisco 10 as well as sold out shows at the Gramercy Theatre in NYC, Pearl Street in Northampton, MA, the Fox Theater in Boulder and the Bluebird Theatre in Denver. As a full band, the music is hitting new highs and killing in the live show. With the addition of an arsenal of new material, more crowds across the nation have begun to embrace this remarkable outfit.

Unlocked – Live from the Georgia Theatre (2012)

Conspirator’s Unlocked – Live From The Georgia Theatre (April 10, 2012/SCI Fidelity Records) captures the spirit of these true genre blenders. The album – recorded 10.06.2011 at the historic Georgia Theatre in Athens, GA – is a collection of live electronic rock bliss, delving, twisting and diving effortlessly between house, dub-step, drum and bass, and electro.